Are Habits Different for Women than Men? 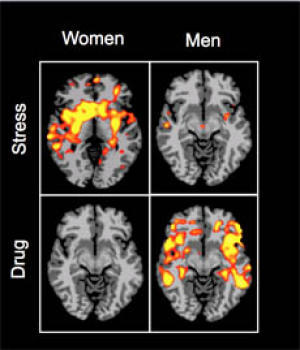 Imagine, for a moment, that a friend comes to your desk and asks for advice: they want to change their smoking and exercise habits. What should they do?

For the last 30 years, the traditional answer has been no. But as we learn more about how the brain works, we’re learning that the best therapies often differ between genders.

Take, for instance, a study that just came out of Yale. Researchers conducted brain scans of 30 cocaine addicts and 36 people who had the occasional glass of wine or beer. While inside an fMRI, the subjects were shown photos of scenes that, in previous interviews, they had said were very stressful, or photos that researchers knew would trigger cocaine or alcohol cravings.

The initial findings weren’t surprising: as anticipated, the cocaine addicts showed greater brain activity in areas linked to addiction (which makes sense) and motivation (in other words, they were more motivated to use cocaine and alcohol).

What was interesting, however, was how much the reactions different between genders.

For women, exposure to stress-related cues triggered addiction impulses. Seeing a photo of a child in potential danger, for instance, caused female addicts to crave a glass of wine or cocaine. Men, on the other hand, were much more less effected by stress. But when men saw drug related cues – a photo of someone at a bar, or of a needle or line of coke – their addictions were triggered. For women, those images had less power.

One take away from this is that therapies should be different for men and women. Female addicts should be instructed in stress reduction techniques, while men – the findings suggest – may do better in a 12 step program.

Other studies have extended these findings to other, healthier realms. A 1992 paper, for instance, looked at the exercise habits of 1,719 women and men, trying to determine who was most likely to start working out. Among men, the leading indicators of developing an exercise habit was the neighborhood they lived in and whether they had a sense of ‘self-efficacy.’ That makes sense, because we know that when we spend time around other people who are exercising, we exercise as well. Among women, however, the leading indicators were education, and family support. The health of the neighborhood didn’t matter as much.

Sources: Neural Correlates of Stress-Induced and Cue-Induced Drug Craving: Influences of Sex and Cocaine Dependence, Predictors of adoption and maintenance of vigorous physical activity in men and women.

12 Responses to “Are Habits Different for Women than Men?”