Do Smoking Bans Cause Drinking and Driving?

by Charles Duhigg in Habits 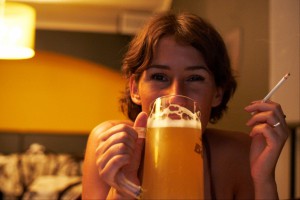 In 2006, two researchers in Wisconsin noticed a weird pattern. A number of cities had recently banned smoking in public places, such as at bars and restaurants. The laws were amazingly effective at cutting down on the number of people using cigarettes. Simply making it harder to smoke meant that fewer people puffed away.

But, for some reason, drunk driving fatalities seemed to increase wherever smoking bans were put in place. What, the researchers wondered, was going on?

The researchers’ first hypothesis was that smokers were driving longer distances to find bars in other cities where it was legal to puff. Or, that smokers were driving to obscure parts of town to find bars that ignored the law, or had outdoor seating where smoking was allowed. This reflects a basic axiom: for the drunk driver, the length of your drive matters almost as much as how many drinks you’ve consumed. That’s why rural areas have so many drunk driving deaths. Intoxicated people who have to drive 30 or 40 minutes after leaving a bar are far more likely to fall asleep at the wheel than a drunk with a three minute commute. When the researchers looked at data from states that had recently implemented smoking bans, the data seemed to support their hypothesis. Bans = longer drives = more deaths. Case closed, they figured.

But a few years later, someone else noticed another strange pattern. By then, smoking bans had spread across the nation. Today, a third of the population lives in areas where smoking is illegal in a public enclosure. And many laws were statewide, so it was impossible for bar-goers to find a smoking-friendly establishment, no matter how long they drove. Studies bore it out: smoking drinkers weren’t driving longer distances anymore. But an increased number of drunk driving fatalities were still occurring. Why?

The answer, I suspect, has something to do with the nature of how habits work – and how cravings exert themselves, even once one habitual behavior is made illegal. The interesting thing about smoking is that it’s not really an addiction, the way that heroin is. Rather, smoking is primarily a dysfunction of habits.

Numerous studies have shown that a physical addiction to nicotine only lasts as long as the chemical is in a smoker’s bloodstream – about 100 hours after the last cigarette. So many of the lingering urges that we think of as nicotine’s addictive twinges are really behavioral habits asserting themselves – we crave a cigarette at breakfast a month after quitting not because we physically need it, but because we remember so fondly the rush it once provided each morning.

But for smokers in bars where smoking isn’t allowed, that habitual urge – the craving that’s at the root of any habit – can’t be satisfied. And so smokers look for something else to feed the urge. At the core of every habit is a three-part, neurological loop. A habit is a cue, a routine, and a reward: 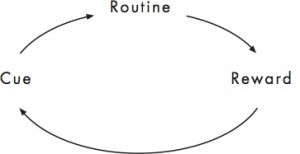 A habit emerges when a cue and a reward become intertwined in a certain way. But rewards are exchangeable – that is, if your habit is to eat a donut whenever you pass the coffee cart, (cue: coffee cart; routine: eat a donut; reward: sugar high!), you’ll be just as happy if you eat a snickers bar, or drink an espresso, or consume anything else that provides a similar burst of stimulation (cue: coffee cart; routine: drink a double espresso; reward: caffeine high!) This basic science – which has been confirmed by study after study – is how habits change. If you keep the cue and reward the same, and shift the routine, you can change the behavior.

So what does this have to do with the smoking bar-goers? Well, when a smoker is at the bar, and is exposed to her smoking cue (which, according to studies, is usually a tickle of craving that occurs when nicotine drops in the bloodstream), but they can’t chase the physical stimulation that cigarettes usually provide, what is she to do? She wants – in fact, she craves – the physical release that cigarettes usually provide. What can she consume instead? At a bar? Where she’s surrounded by bottles of liquor?

Oh, that’s right: she can have a drink. The habit is preserved. There’s a cue: that urge for stimulation. A routine: have a drink. And a reward: Liquor high! It’s not precisely the same as a nicotine high, but it’s pretty close.

That’s why drunk driving increases when states implement smoking bans – because smokers start drinking more to appease a cigarette habit that can’t be satisfied with a quick puff.

So what’s the solution? How do we get smokers to stop drinking to offset their cigarette habit? A forthcoming study offers an interesting answer. Researchers went into a dozen bars and handed out donuts, to see if they would cut down on the total number of drinks ordered. What they discovered was that the average bar-goer doesn’t order fewer cocktails after eating a donut. But smokers, oddly, cut down on their drinks after munching on a jelly-filled crueler.

Why? Because it satisfied the habit. Cue: the urge for stimulation. Routine: eat a donut. Reward: sugar high! If you want to cut down on drunk driving among smoker, serve them donuts when they walk through the door.

Some of the ideas and portions of this post draw on my book, The Power of Habit

6 Responses to “Do Smoking Bans Cause Drinking and Driving?”