I was on Democracy Now yesterday, talking about Apple. (Click on the headline to watch.) 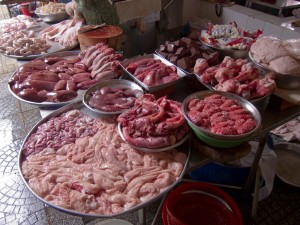 – including Margaret Mead and Kurt Lewin, who would go on to become celebrity academics – and gave them an assignment: figure out how to convince Americans to eat organ meats. Get housewives to serve their husbands and children the protein-rich livers, hearts, kidneys, brains, stomachs and intestines that were left behind after the steaks and pork loins went overseas. END_OF_DOCUMENT_TOKEN_TO_BE_REPLACED

I’ve always been fascinated by how peoples’ habits change in the wake of major events, particularly in unexpected ways. After WWII, for instance, Americans started eating more organ meats, like kidney and tongue. In the wake of Hurricane Katrina, people in Louisiana, Texas and Mississippi started buying more expensive brands of beer, but less expensive brands of toilet paper. And that small shift in buying habits persisted for almost two years.

And, of course, lots of things changed after September 11th.  What’s fascinating is also how much things stayed the same. In this New Yorker post, Steve Coll describes how his family shifted (and how it didn’t):

My kids belonged to Washington’s Code Blue generation. We all assumed that another attack was quite possible, one in which my wife and children would evacuate toward the mountains to the West, and I would go into work in the city, and try to find them later.

Each family car had maps marked with back-road routes to Hagerstown, Maryland, on the assumption that the main highways would be gridlocked. We had no particular connection to Hagerstown, but it was a town I had passed through as a child, on the way to visit relatives in Western Pennsylvania, and it seemed a safe but manageable distance away. … END_OF_DOCUMENT_TOKEN_TO_BE_REPLACED

Of course, this isn’t surprising to anyone who has ever looked for a job. Unemployment is soul crushing. But there might also be another factor influencing this  malaise: As small losses begin accumulating in someone’s life, their habits start changing. END_OF_DOCUMENT_TOKEN_TO_BE_REPLACED

Let me be overwhelmingly honest: I have no idea what I am doing. However, there are a few things that I know a small amount about: the science of habit formation and patterns among individuals and organizations, writing, newspapers and investigative journalism. So, that’s what I’ll stick to writing about. For at least the first…Read More